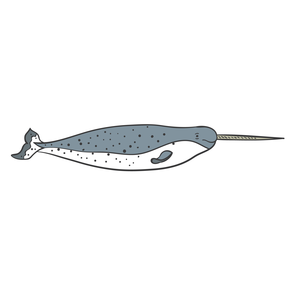 The narwhal, or narwhale, is a small to medium-sized toothed whale that possesses a large "tusk" from a protruding canine tooth. It lives year-round in the Arctic waters around Greenland, Canada, and Russia.  It is sometimes called the "Unicorn of the Sea" because of what appears to be a huge horn coming out of its head.
There is so much about the narwhal's tusk that is, frankly . . . weird -- we hardly know where to begin!
First of all, it is not a horn, but a tooth.   And, unlike most teeth that have the sensitive part protected by a hard outer covering (the enamel), the narwhal's tooth design is pretty much the exact opposite.
Typically, teeth are hard, which makes them useful for their main human purpose: chewing food. With most mammals, the outer layer of a tooth is made up of enamel, with less hard materials called dentin and cementum below that. At the very center of the tooth is the pulp, where the blood and nerves are found. (You might realize you have a cavity once the pulp is infected and hurts.) The hard outer layer protects the sensitive inner layers of the tooth by acting as a form of insulator. With the narwhal tusk that feature is reversed. The soft, sensitive part is on the outside, while the dense, hard part makes up the middle. Ten million tiny holes lie right along the surface on the tusk. Human teeth have these little tubules too, which is why sometimes the cold bothers your teeth, but they're covered with enamel.
Imagine having all your nerves exposed in the icy waters of the Arctic. Why would the most sensitive part of a tooth be on the outside?
One theory suggests that the narwhal tusk acts like a sensor. Having all those nerves on the outside allows the whale to detect water pressure, temperature and salinity. It might even be able to detect barometric pressure when it's above the water's surface. However, if the tusk is so important to survival, why don't females have one? We wish we had an answer for that.
Does the weirdness end there?  Nope.  Another unique feature is that it's the only straight tusk in the world. All other known tusks are curved. It's also one of the only spiraled teeth. The left tooth comes up through the jaw and it corkscrews right through the lip. Every now and then, someone spots a double-tusked narwhal, which happens when the whale's right tooth grows into a tusk too. But, snubbing nature's liking for symmetry, this second tusk doesn't mirror the first -- it spirals in the exact same way as the other one -- to the left!
The tusk is also flexible, and it is able to bend about a foot in any direction without breaking. Human teeth are not so lucky.  They will crack if excessively bent.  The narwhal tusk can also grow up to 9 feet (2.7 meters) or more. Which is amazing when you consider that the male is only about 15 feet (4.6 m) long at maturity.
Check out this link to our source on the narwhal if you would like more information:  CLICK HERE