We Call That a Poligrip Moment | Toothwiz
Skip to main content

We Call That a Poligrip Moment 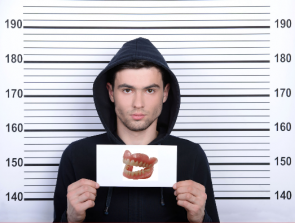 In Argentina a burglar was caught after he lost his false teeth during a break in. The victim, Juan Navarro, was robbed by three men, and during the robbery one of the men lost his dentures. The newspaper “Noticias Populares” reports that Navarro handed the dentures over to police. He then noticed that his own nephew was missing his teeth. Navarro reported his suspicions, tests were done, and the match was made. A police spokesman reported to the popular newspaper “What a funny thing to happen. Caught by a denture! Unbelievable!”

The same scenario of lost teeth helped solve a crime in North Poland. Wojtek Lekowsky, 54, broke into a car and dropped his teeth. The police scanned records and were able to find him in a short time to charge him with the crime.