I'm Here for My Blackening Appointment 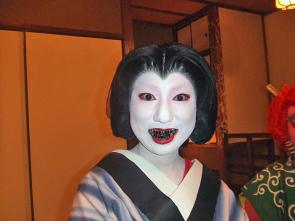 In the early 1600s Japanese women made their teeth black to show loyalty to their husbands.

Ohaguro is the term for this custom of dyeing one's teeth black. It was most popular in Japan until the Meiji era. Tooth painting was also known and practiced in the southeastern parts of China and Southeast Asia. Dyeing was mainly done by married women, although occasionally, men did it as well. It was also reported as beneficial, as it prevented tooth decay in a similar fashion to modern dental sealants.

The main ingredient was a dark-brown solution of ferric acetate called kanemizu, made by dissolving iron filings in vinegar. When the solution was combined with vegetable tannins from such sources as gallnut powder or tea powder, it would turn black and become non-water soluble, in the same manner that iron gall ink is produced. Coating the teeth with this liquid helped to prevent tooth decay and enamel decay. The dye had to be applied once a day or once every few days.